The last of Uzbekistan's 'golden triangle' ancient silk-route cities that I visited was Khiva. Although the most remote and inaccessible of the three, Khiva is without a doubt the most compact and for this reason is perhaps the best-preserved and most enchanting. Although Khiva doesn't quite boast the gargantuan structures of the magnitude of Samarkand's Registan or Bukhara's Kaylan Tower, but the pristinely kept walled city, with it's beige walls and colorful turquoise minarets makes a captivating open-air museum that takes you back all the way to the times of the ancient Khorezm Khanates. 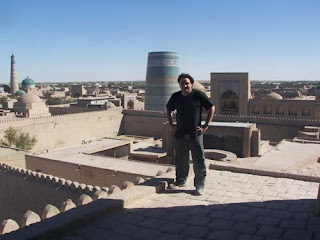 Khiva is not an easy place to get to. The closest train station or airport is in Urgench - about an hour away. I took the night train in from Samarkand and flew out to Tashkent. Khiva is also en route to Nukus, the portal to the notorious Aral Sea. Located in the Karakum Desert, it can also get pretty hot in the summertime, when it also gets a little too quiet. However, Khiva definitely should not be missed. There are plenty of cheap and comfortable places to stay within the Ichon Qala (old city) and your trip to Uzbekistan will not be complete without a visit to all three of Uzbekistan's silk route city-trinity. 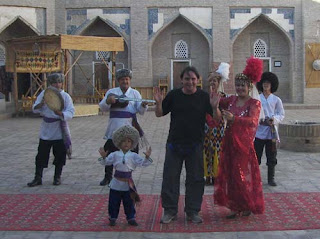 To view the complete photos/write up, click here:
http://www.glennstevens.biz/khiva.htm
Posted by glennaldo_sf at 7:23 AM No comments:

While Samarkand may have been the center of Uzbekistan's legendary Timurid dynasty, the nearby city of Bukhara (Buxoro in Uzbek) is a great place to get a taste of Uzbekistan's Persian legacy. In fact, in the southern region of Uzbekistan, a large minority of the population is speaks Tajik as their native language (Tajik being a derivative of the Persian language). Only a short three hour drive away from Samarkand, Bukhara was an all-too short day trip for us; however, a more extended stay is highly recommended. 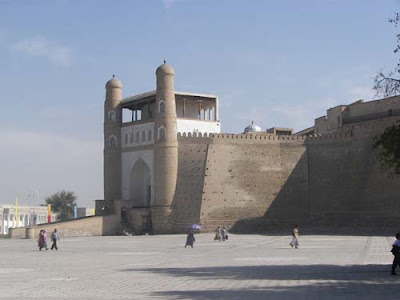 Like Samarkand and Khiva, Bukhara was a major stopping destination on the ancient silk route, and has been a cultural hearth of Central Asia, and the Islamic world. Originally founded by Persian Sogdians, Bukhara became the capital of the Persian Muslim Samanid Empire. The Samanids turned Bukhara into the Islamic intellectual center of the world in the 9th century and the city spawned some of the most notably scholars in Islam, notably Imam Al-Bukhari, the blind author who penned large sections of the Koran. Although the Mongols leveled most of the city in the 13th century, the city was rebuilt and flourished under the Uzbek Shaybanid Dynasty in the 16th century. Many of the splendid architectural monuments on display in the city are inherited from this time. 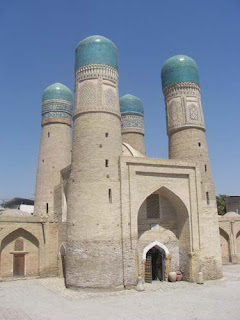 Bukhara's most renowned sites include the massive walled-city of the Ark Fortress - which served as the fortified residence to many of Bukhara's various rulers. Just across from the Ark is the Po-i Kalyan Complex, Bukhara's Registan. The Po-i Kalyan boasts the Mir-i Arab Madrassah, and the Kalyan Mosque. The adjoining markets of Taki-Sarrafon, Taki-Telpak Furushon, and Taki-Zargaron are legacies of Bukhara's role of the silk route. The multi-domed rooftops of both the markets and the Kaylon mosque make for some 400 domes. The best place to see these dome-roofed patterns is from atop of the Kaylon Minaret. This historic tower is perhaps the first ever earthquake-proof structure built in the world. Built in the 12th century, the tower has never fallen in 800 years - despite standing at the center of one of the world's most volatile fault zones! 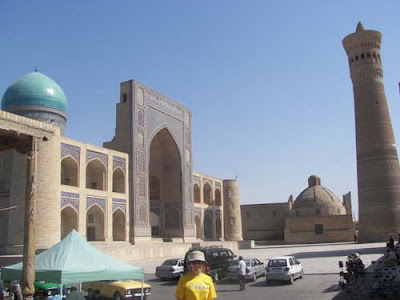 To see the complete photo set from the trip, click here:
http://www.glennstevens.biz/bukhara.htm
Posted by glennaldo_sf at 7:06 AM No comments:

Uzbekistan is a country that has enjoyed a cult-like status for travelers. It is about as off the beaten path as you can get, yet at the same time - quite safe. It has plenty to offer; pristine monuments in some of the worlds oldest inhabited cities, yet unspoiled by hordes of tourists. The country, like most of polyglot Central Asia, is rich in culture and tradition - filled with bustling bazaars and centuries-old majestic mosques and mausoleums. In Samarkand, Bukhara, and Khiva; Uzbekistan offers three of the world's oldest and most historic cities. These well preserved urban centers serve as testament to ancient silk route's main trading centers and are the legacy of Emir Tamerlen's Timurid dynasty.

Uzbekistan has never been an easy place to get to. Not only is it the world's only double-landlocked country (Liechtenstein notwithstanding); but one must endure some abrasive Soviet-style bureaucracy in order to get a visa. Although a time-consuming and also pretty expensive process, with limited help from the Uzbek consulate in Dubai, this was finally acquired. Tashkent (Uzbekistan's capital) airport is also notorious for all sorts of scams and tricks from the officials themselves, although this has been cracked down on a great deal recently. 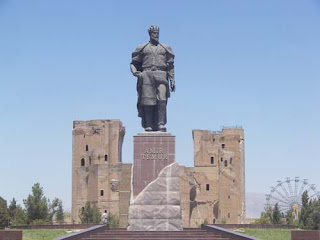 Once you do get all your appropriate paper work and documents in order, Uzbekistan reveals itself as an intriguing destination. While the Russian's moved the city's status as the nation's administrative capital to Tashkent in the 1930's, Samarkand (Samarqand) remains Uzbekistan's cultural heart. I arrived just as the city was about to celebrate its 2,750th birthday. Samarkand remains a fascinating place to explore amongst its highlights are the Registan (which means "sandy place" in Uzbek), which remains the heart of ancient Uzbekistan. Comprising of three madrassahs (Islamic holy schools), the Registan was built between the 15th and 17th centuries and is considered one of the most grandiose monuments in all of Central Asia. The nearby ostentatious Bibi-Khanym Mosque, dedicated to Emir Timur's Mongol wife, is another highlight. Lucky enough, my host family lived just across the road from Bibi-Khanym. 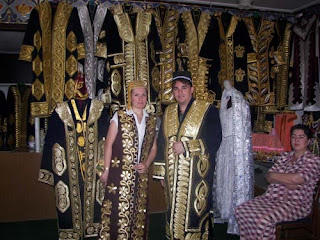 The moving Shah-i-Zinda, or "Tomb of the Living King" is a fascinating collection of mausoleums, where mostly the extended family of Emir Timur are buried - as well as Queam ibn Abbas, the prophet Mohamed's cousin, who supposedly brought Islam to the region. The Ulugh Beg Observatory was considered state of the art when it was constructed in the 1420s and its remains and adjoining museum are also worth a look, as is the Gur-e Amir tomb - where Emir Timur is buried. 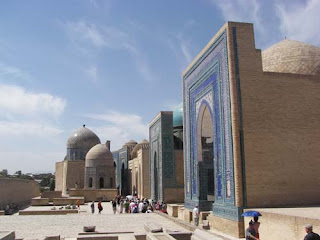 To see the photos taken from the trip, click here:
http://www.glennstevens.biz/samarkand.htm
Posted by glennaldo_sf at 1:59 AM No comments: