Since the break up of Czechoslovakia in 1993, Slovakia fell behind its western neighbor in both economics and tourism. However, there are still plenty of things to see and do and Slovakia’s economy is booming with the planned adoption of the Euro to replace the Slovak kroner in 2009. Slovakia is a land of fairytale castles, with about 180 castles scattered across the country. The most impressive of these castles is probably Spiš Castle (aka Spišský Hrad), located in the northeast of the country. Spiš Castle is located in the northeast of the country, overlooking the town Spišské Podhradie and is one of the largest castles in central Europe. The of and from the castle are mesmerizing and fans of movies such as Dragonheart, Kull the Conqueror or the Last Legion will easily recognize Spiš Castle as they were all filmed here. 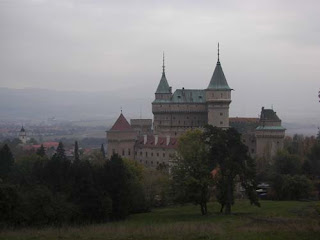 I arrived to Slovakia by night-train from Krakow to Košice, Slovakia’s second largest city after Bratislava. I didn’t stay long however and soon made my way up to the walled-town of Levoca, a stoppover en route to Spiš Castle. After spending the day at both Levoèa Spiš, I made my way west to Bojnice, located in the heart of the country. Bojnice is no more than a small town located in the outskirts of the city of Prievidza. However, it’s famous for… yep, you guessed it, a castle… located right in the center of town. After overnighting in Bojnice, I made my way to Bratislava, Slovakia’s capital and largest city. Lively Bratislava is located on the Danube River with both neighboring countries Hungary and Austria just a stones throw away. Bratislava was in fact the last leg of my journey with nearby Vienna airport (where I was due to fly out of) not even an hours bus ride away. 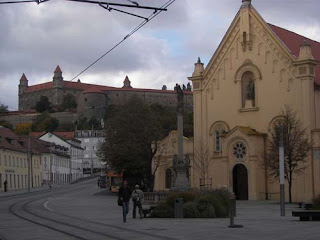 To view all photos and the writeup, check my website:
http://www.glennstevens.biz/slovakia.htm
Posted by glennaldo_sf at 9:51 AM No comments: 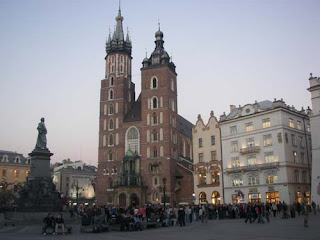 After completing the first leg of my Eastern Europe trip by exploring Prague and the Czech Republic countryside, I headed east to Poland. As my time was limited, focused simply on Krakow and its surrounding environs. Krakow is officially the capital of the Molopolska region and the unofficial bohemian culture capital of Poland. It is also an extremely popular and lively city that attracts tourists and artists alike. This is due to the fact that Krakow was the only major city in Poland not to be completely obliterated by the Germans during World War II. Therefore, many of its historic monuments have stayed intact and there is plenty to see and do here. 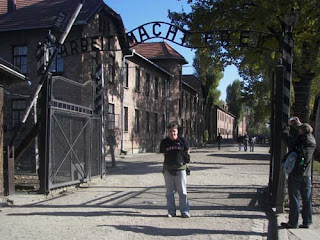 Krakow revolves around its Main Market Square, Rynek Glowny; which, at 200 sq. meters, -stands as the largest medieval town square in Europe. Several of Krakow's most renowned monuments are located here, including St. Mary's Basilica (cathedral), the Skiennive Cloth Hall market and St. Adalbert's Church. The vibrant essence of the square makes one of its many nearby hotels or hostels a good place to stay, as I inevitably wound up doing. The numerous streets and alleys leading from the square are filled with pleasant restaurants and shops and a walk down the vibrant Grodka St. eventually leads to the Wawal Castle, where Poland's rulers lived for over 500 years until the late 16th century. 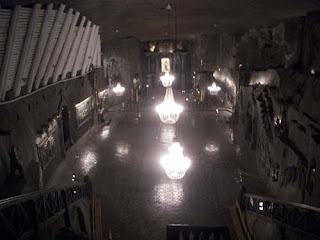 Krakow also offers several intriguing day-trip sites accessible from the city's main train station. Although the Soviets managed to save Krakow from imminent Nazi destruction during World War II, the nearby Auswitz and Birkenau former-concentration camps are a grim reminder of the atrocities committed by the Nazis in Poland. A slightly more sanguine experience can be had at the stupefying Wieliczka Salt Mines. 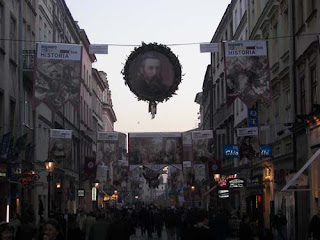 Although not really a great place to go if you're on a honeymoon, world war II history buffs will definitely want to make the trip to the nearby Auschwitz & Birkenau former concentration camps nearby the town of Oswiecim. It was at these camps where the Nazis committed their worst atrocities of genocide. Some 1.5-2 million people, mainly Jewish, met their deaths here. The camps have now been turned into memorial centers and are visited by the thousands daily. A more uplifting experience can be found at the Wieliczka Salt Mines - about 15km south of Krakow. Although I never quite got the pronounciation right, the Wieliczka Salt Mines tour takes visitors some 300 meters below the surface into underground caves made up almost entirely of salt. Amazingly, there's even chapel constructed over a century ago located in the mines. If you're Krakow, than both Auschwitz and Wieliczka should definitely be on your itinerary! 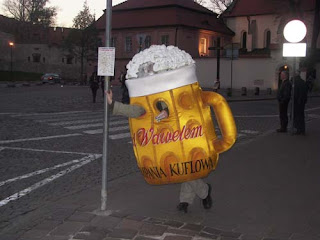 To view all photos taken from this segment of the trip, click here:
http://www.glennstevens.biz/poland.htm
Posted by glennaldo_sf at 9:41 AM No comments: 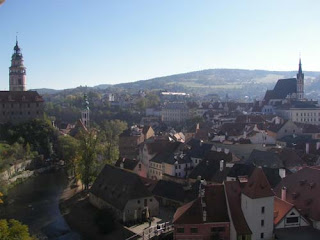 While Prague is obviously the Czech Republic's main attraction, the country, which had previously been split between the ancient kingdoms of Bohemia and Monrovia - is filled with charming villages and captivating castles that have been preserved for centuries. After spending an entire day in Prague, I headed off to the Czech countryside to explore the ancient land of Bohemia. The main stops on my two days exploring this fascinating country were the enchanting castle of Karlštejn, the beer-brewing hearth of Plzen and the surreal town of Ceský Krumlov. The train station at Ceské Budejovice was also pretty much unavoidable. 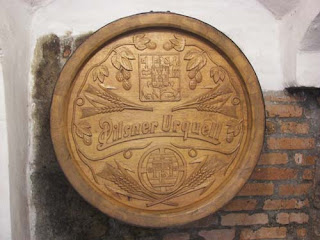 Karlštejn was the first stop. The charismatic gothic castle, perched picture-perfectly on a hilltop looks like something out of a fairy tale. It is only a half hour train ride from Prague and makes a very doable half-day trip. Czech Republic is famous for its' beers so a visit to one of its' many breweries is a must. After Karlštejn, I made my way to Plzen - located in the western part of the country. Plzen is famous for being the old capital of western Bohemia as well as the birthplace of pilsner. Plzen's main brewery company is Pilsner Urquell and a trip to the company's brewery museum was the main reason for coming here. My final destination before heading back to Prague was the glorious red-roofed town of Ceský Krumlov. This photogenic town is like an open-air museum with stunning views to be found everywhere you turn. Ceský Krumlov has featured in several films, including The Illusionist. 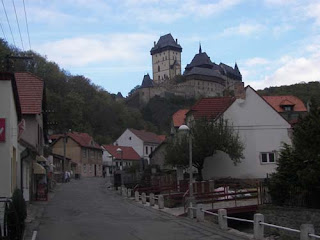 To view the rest of the photos, check out here:
http://www.glennstevens.biz/czech.htm
Posted by glennaldo_sf at 9:32 AM No comments:

For my Eid Al-Fitr break in 2007, I embarked on a week long tour of Eastern Europe. The plan was to fly from Dubai-Vienna-Prague and travel through the Czech Republic, southern Poland, and Slovakia, before making my way back to Vienna to catch my flight back to Dubai. The first stop on the trip was the majestic medieval centerpiece of Prague. Kept off the beaten path for so long under communist rule, Prague is fast becoming one of Europe's top destinations, and the city does not disappoint. Unlike some of its neighboring capital cities, Prague was pretty much left unscathed during World War II - therefore; the antique historic city center now sits as a virtual living history museum. 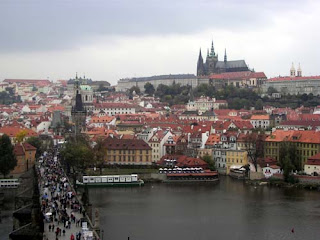 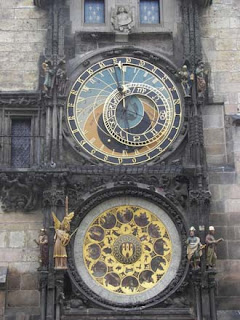 Meandering through the cobble-stone streets, one finds themselves transported through time all the way back to Prague's two greatest architectural periods: the Gothic period under Holy Roman Emperor Charles IV and the baroque period during Hapsburg rule. While Prague has many notable tourist attractions, the essence of Prague is captured in simply wandering through it's plethora of boulevards and medieval streets and streets. Several of these attractions offer some fantastic views of the city. Prague Castle offers some fantastic panoramic views of the city, and vice-versa, the view of the castle itself from the banks of the Vltava River are also striking - at all times of the day and night. Charles Bridge, not only acts as a pedestrian transportation connection between the eastern and western banks of the river, but also serves as a shopping promenade. The carnival-like atmosphere along the bridge is one of Prague's greatest attractions and the Mala Strana Bridge Tower offers some great sights of the city.

Prague comes alive at night as well. There's a glut of restaurants, cafes, and beer tents to fulfill every taste in international cuisine. And there's never a shortage of entertainment in Prauge either with events ranging from theatre and classical music to modern rock concerts advertised everywhere. My choice of entertainment was the rather unique 'blacklight show' (http://www.wow-show.com/en/). After several days in Prague, I explored the Bohemian countryside villages before heading off to Poland. 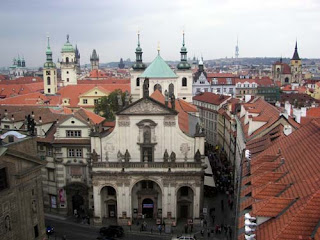 To view the rest of the photos/write up, check out my site @:
http://www.glennstevens.biz/prague.htm
Posted by glennaldo_sf at 9:20 AM No comments: